My blog featured in Orchids made easy

Ryan and Laura Levesque, authors of Orchids Made Easy - a book and website all about how to care for orchids, invited me for an interview for their web page. That was about how i got into orchids and my research on orchids, which you can check out in the link below:
http://www.orchidsmadeeasy.com/nepali-orchids/

Many thanks to Ryan and Laura for featuring me in their web page. I am very happy to share that people are visiting my blog and curious about orchids from Nepal.

Bulbophyllum nepalense Raskoti & Ale was for the first time reported from Nepal by BB Raskoti and R Ale. The new species was collected from Shivapuri National Park, Kathmandu at an altitude of 2300 m asl.  Description on this species is published in a journal, Edinburgh Journal of Botany in 2013. 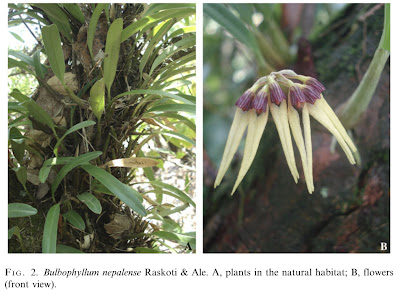 The newly reported species is similar to B. retusiusculum Rchb. f., with which it shares the oblong dorsal sepal, the elliptic petals and the oblong decurved ligulate lip but differs in having narrow pseudobulbs, the falcate, acute-acuminate lateral sepals, and two strips of papillae or short hairs on the adaxial side of the lip, close to the margins.
The new species is also somewhat similar to B. tigridum in petals and lip shape but the later differs from the new species in having short pseudobulbs, ovate dorsal sepals and lip apex with hyaline upturned protuberance.

Rajkoti and Ale (2012) reported Liparis ferruginea Lindley first time from Nepal. They collected this species from Hetauda, Makwanpur district, Narayani Zone, Central Nepal at an altitude of 400 m asl. Article based on this species is published in a journal, Taiwania.


L. ferruginea is similar to L. odorata (Willdenow) Lindley, with which it shares almost floral characters. It is distinguished from L. odorata by the lateral sepals pushed close to the underside of the lip, strongly curved above the middle, their inner margins closely aligned and apparently connate. In L. odorata lateral sepals pendent below the lip, curving downwards, the inner margins parallel but not closely aligned.

Paper published in Plant Ecology by Adhikari et al (2012) found strong relationship between epiphytic orchid species in different land use intensities in Kathmandu valley. In total, they identified 23 orchid species from 42 host trees. Among the epiphytic orchids Rhynchostylis retusa was most dominant one. The study found that for successful establishment and success of epiphytic orchids, host species and bark characteristics such as rugosity, pH and exposure to wind played a vital role.
The study found that higher numbers of epiphytic orchids were found on larger host trees in urban areas than in areas of lower human impact. Also, older larger trees with rougher bark, low pH, exposed to wind and
reduced human impact provided better habitats for orchids. This findings will be beneficial for urban palnning to reduce human impact on the associated orchid epiphytic community.
To read full paper click HERE.
Posted by Kamal Prasad Acharya No comments:

HOW MANY ORCHIDS ARE FOUND IN NEPAL?

Nepal is endowed with rich Orchid flora due to wide topographic variation and climatic conditions. Every year new species of orchids are reported from Nepal. This shows the need of detail exploration. Flora Nepal Project is undergoing and hopefully that will cover major regions of Nepal and will available soon. Regarding the number of orchids found in Nepal, different authors mentioned different figures. For example, Press et al (2000) in Annotated Checklist of the Flowering Plants of Nepal mentioned 89 genera and 323 species. Rajbhandari and Bhattarai (2001) in Beautiful Orchids of Nepal mentioned 97 genera and 363 species. Rajbhandari and Dahal (2004) in Orchids of Nepal: A Checklist mentioned 100 genera and 377 species and Rastogi (2009) in The Orchids of Nepal mentioned the number to be 102 genus and 388 species. This shows more recent the publication, higher the number of orchids. However, some authors mentioned synonyms in their publication.
I complied total number of orchids found in Nepal with the help of many literature. The total number of orchids found in Nepal is 494 (this includes 456 species, 30 varieties, 6 subspecies and 2 forma). These species fall within 104 genus.
To see total list of orchids, click here.

Distribution pattern of the epiphytic orchid Rhynchostylis retusa under strong human influence in Kathmandu valley, Nepal by Adhikari, YP and Fischer, A

A paper published in in a journal, Botanica Orientalis (2011 issue) by Adhikari, YP and Fischer, A., studied distribution pattern of the epiphytic orchid, Rhynchostylis retusa (L.) Blume with respect to site haracteristics and host conditions and type and intensity of land use in Kathmandy valley, Nepal.

The study found that R. retusa was not a host-specific orchid species. It was found on different host tree species. However,  Ficus religiosa was the most common host species and there was weak correlation between R. retusa occurrence and microclimate condition. R. retusa, to a certain degree, preferred light intensity of 40-80% of full sun light, rough bark with pH around 6.5 and bark with a wide  range of water holding capacity. The distribution pattern of  R. retusa was influenced by certain types of land use. The probability to find  R. retusa was highest in forest patches and parks and lowest in agricultural and dense populated area. The study concluded that to improve the population size of  R. retusa, trees (mainly  Alnus nepalensis, Ficus religiosa  and Schima wallichii) should be planted in areas where the orchid species is recently missing. To download full paper click here.
Posted by Kamal Prasad Acharya No comments:

Orchid poaching and the media in Nepal 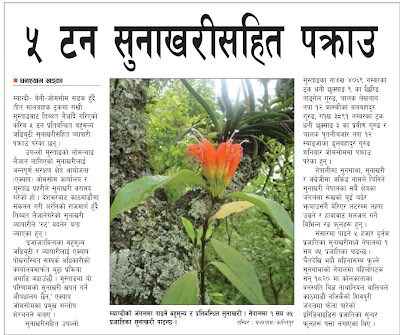 Few days back, some smugglers were caught by Nepal police in collaboration with staffs of Annapurna Conservation Area Project (ACAP) in Jomsom. They captured 5 tons of dried orchids loaded in three trucks. The news was in published in a national news paper, Kantipur daily but some of the information provided in the news is wrong. First, the number of orchids found in Nepal is about 411 (this is list I compiled from different sources. Some sources mentioned numbers higher than this but there are some synonyms used in those lists). But, the reporter of the news mentioned the number of orchids found in Nepal is just 175. So, the national media should be aware of the information. There is still lack of reporters who are aware of those scientific facts. This type of mistakes are very frequent in national media. Secondly, the picture in the news is not the orchid. There is orchid on the branch of a tree but the plant in focus is not an orchid. (News source: Kantipur daily, 23.01.2012)
Posted by Kamal Prasad Acharya 1 comment:

ORCHID DIVERSITY IN THE CHITWAN DISTRICT 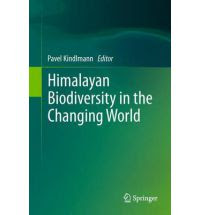 There are few studies on orchids from low-land of Nepal. One article is recently published by Traxmandloá et. al. in a book: Himalayan Biodiversity in the Changing World. The book is edited by Pavel Kindlmann and published by Springer Publication in September 2011.
The authors conducted study in Chitwan National Park (CNP), Barandabhar Corridor Forest (BFC), the Mahabharat Range (MR). The orchids in the trees, on the rocks, and on the ground were recorded along a total of 200 line transects: 40 in BFC, 105 in CNP, and 55 in MR. They studies association between different tree species and orchids in those regions. Click here to read details of this article. 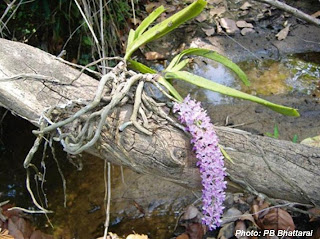 Study carried out by Koirala et al (2010) documented orchids from 17 Village Development Committees (VDCs) of Rolpa district, western Nepal and estimated the stock of two orchid species: Dendrobium denudans D.Don and Dendrobium eriiflorum Griff. The study documented 36 species of orchids. Among which, 31 were identified up to species level, two were identified up to generic level and 3 were unidentified.
The total stock of D. denudans was highest in Uwa VDC with 11018.08 kg followed by Seram VDC with the stock of 9982.57 kg. Similarly, D. eriiflorum stock in Seram, Siuri andJaimakasala VDCs were 22750.01 kg, 7039.67 kg and 4933.46 kg, respectively.
This study recommended systematic research on the propagation technique; completeindexing of orchids; and inclusion of orchids in the Red Data Book on the threatened and endangered species. Further they recommended for establishment of orchid reserves for preservation and promotion of regeneration activities. The study also recommended for implementation of laws for protection of orchids. The article is published in Vol 20 (2) of a journal, Banko Jankari. To access full article click here.

I am very happy to share that one of my publication on orchids from Nepal and Bhutan is published in a journal, Journal of Biogeography. Ohh.... it took nearly 18 months to get published on line after we submitted. Although i might have done very little than my co-authors, its the first experience of publishing an article in a high impact factor journal. I want to thank all those who have supported during the study.
Main conclusion of the paper is: This study shows that climatic variables (temperature and precipitation) provide a good potential explanation for orchid species richness along the Himalayan elevational gradient, even when the effect of area is considered. The principal elevational peak in richness of central and eastern Himalayan endemics was consistent with the peak in total orchid richness, but maximum terrestrial endemic richness occurred at higher elevations.
Click here to read full article.
Posted by Kamal Prasad Acharya No comments:

One of my paper on orchids from Nepal and Bhutan is published in an internal journal, Journal of Biogeography. The paper is available on line on 12 May 2011. Its great experience for me to publish article in such journal. Ohh... it took nearly 18 months to get published. Many many thanks to my two co-authors who from the very beginning encouraged me for this paper.
The study explores the relationship between orchid species richness along elevational gradients in the Central Himalaya (Nepal Himalaya) and Eastern Himalaya (this includes Bhutan and its adjoining areas).
This study is based on secondary sources. We used published data on the distribution of orchids to interpolate presence between maximum and minimum recorded elevations in 100-m elevational zones. These patterns were compared with previously published patterns for other plant groups, which were derived in the same way.
A hump-shaped relationship between orchid species richness and elevation was observed in Nepal and Bhutan, with maximum richness at 1600 m a.s.l. corresponding to c. 16 C mean annual temperature. The richness of orchid species that are endemic to central and eastern Himalaya showed a bimodal pattern. Richness of endemic epiphytes peaked at elevation zones similar to those for total richness, but the peak in numbers of endemic terrestrial species occurred at a higher elevation.
This study shows that climatic variables (temperature and precipitation) provide a good potential explanation for orchid species richness along the Himalayan elevational gradient, even when the effect of area is considered. The principal elevational peak in richness of central and eastern Himalayan endemics was consistent with the peak in total orchid richness, but maximum terrestrial endemic richness occurred at higher elevations.
To read full article click here.
Posted by Kamal Prasad Acharya No comments: 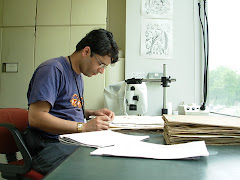 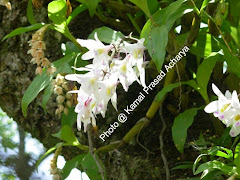 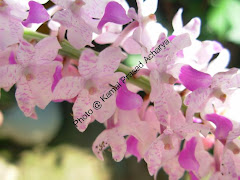 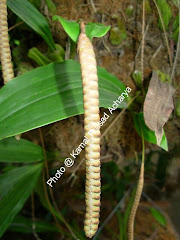 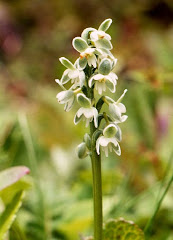 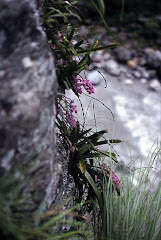 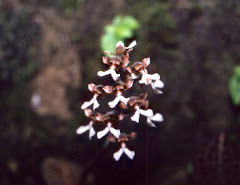 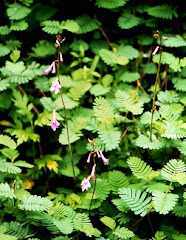 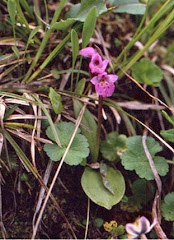 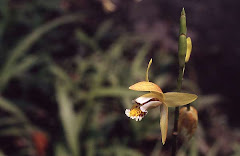 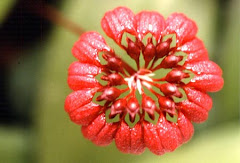 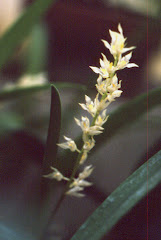 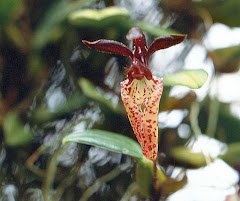 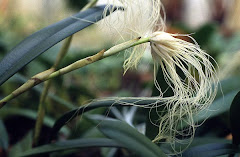 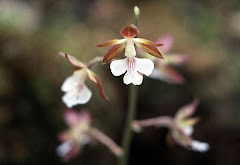